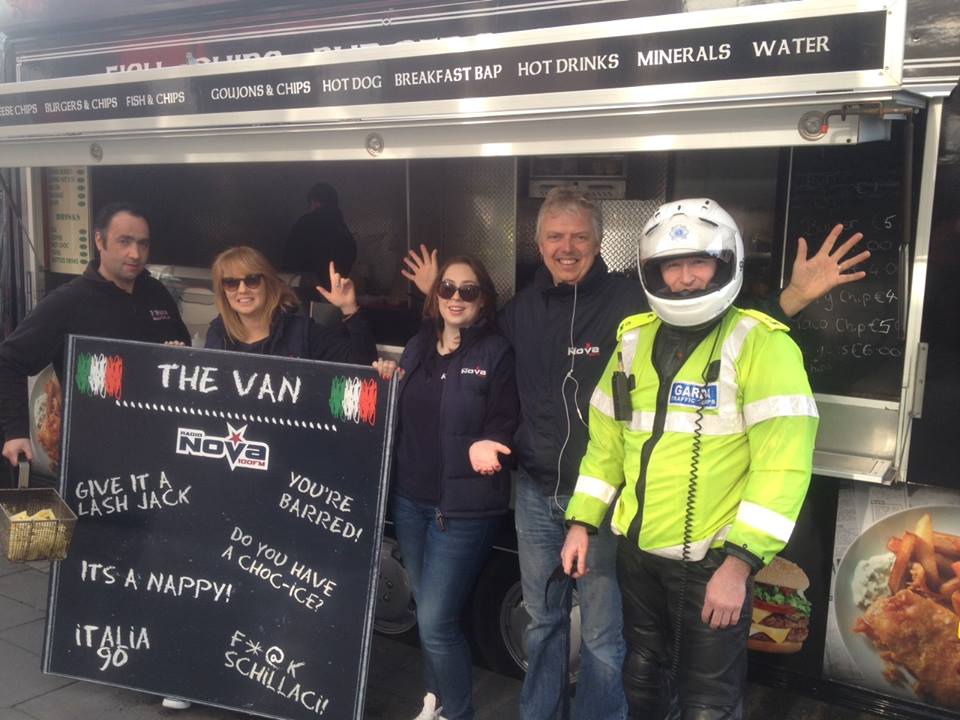 CHIPS AT DAWN FOR NOVA LISTENERS!

To celebrate Roddy Doyle’s ‘Barrytown’s Trilogy’ receiving its official coronation as April’s ‘One City, One Book’ choice, Radio NOVA dished out chips to hungry early morning commuters this morning.  The station’s ‘Morning Glory with Dee & Marty’ breakfast show paid tribute to Doyle’s trilogy with a nod to ‘The Van’ by serving chips from a ‘borrowed’ chip van on St. Stephen’s Green!

In response to a challenge from a listener, NOVA’s roving reporter Electric Eddie had three days to ‘blag’ a chip van and serve up chips to people on their way to work. Meanwhile, presenters Dee & Marty enjoyed the interest of the listening public in all things chips, with Love/Hate’s Peter Coonan (aka Fran) taking part in the action live from the NOVA studio.

The Barrytown Trilogy consists of the first three novels by Irish writer Roddy Doyle and was first published as a trilogy in 1992. All of the three novels have been adapted into successful movies. The three novels are: The Commitments (1987), The Snapper (1990), The Van (1991). All three novels are focused on the Rabbittes, a working class family from Dublin. Set in “Barrytown”, a fictitious working-class quarter of Dublin. Brendan “Bimbo” Reeves gets laid off from his job as a baker. With his redundancy cheque, he buys a van and sells fish and chips with his best mate, Larry.

Electric Eddie joined NOVA’s Morning Glory team earlier this year and is set regular challenges by listeners, which he is given a certain length of time to achieve. “This was a tough one but we were determined to win the challenge. And the next challenge? Bring it on!”, said Eddie.

Radio NOVA broadcasts to Dublin, Kildare, Meath & Wicklow on 100.3FM. The station has 132,000 listeners throughout the Greater Dublin area and plays a a diet of guitar- based music from the 60s to today including artists like The Killers, Kings of Leon, Coldplay, The Rolling Stones, Guns & Roses and The Police.