Radio Nova today announced details of the new partnership that will see seasoned presenter Joan Lea and Nova favourite Marty Miller take on the breakfast show market in the Dublin area. The show, launching on October 23rd, will combine top-notch breakfast-time banter with the music that has made Nova a prized station amongst radio audiences in Dublin, Meath, Wicklow and Kildare.

Joan Lea comes to Radio Nova with an impressive track-record in Irish radio.  One of the original members of the hugely successful Strawberry Alarm Clock team on FM104, most recently Joan hosted her own late night talk show on Dublin’s 98FM, which ran for five years. Prior to her time in radio, she worked as a professional jazz performer and jingle singer.

With 15 radio awards under his stud belt, Dubliner Marty Miller has been one of Radio Nova’s most consistently popular presenters since the station’s launch in 2010. He currently hosts the afternoon slot at Nova mixing news, interviews, chat and the best in guitar music.  His radio career started at the age of 16 and since then, he has presented and/or produced award-winning shows on stations including South East Radio, 98FM, Spin 1038 and Today FM, but admits that his love for ‘proper’ music finally brought him to his spiritual home at Radio Nova.

Radio Nova CEO Kevin Branigan said, “Joan and Marty have an unquestionable on-air chemistry and will be a fantastic on-air team. We feel that after three years, Radio Nova has come of age and is now in a position to bring a new challenge to the more established breakfast show market.

“The station is firmly established in what is an extraordinarily tough and competitive marketplace, but Radio Nova has continually managed to grow its market share, increasing by 37% since the start of 2013.* I’m confident that Joan and Marty’s show will appeal to a wider audience, opening up the station to a whole new demographic, whilst ensuring that our loyal listeners continue to get the music and the banter that has secured our position in the market.”

Joan Lea added, “I feel very much at home on breakfast radio and whilst we are up against some pretty serious players in that time-slot, we’ll be coming out fighting and it’s a challenge we will relish and are ready for. It’s an exciting time to join Radio Nova as its star is clearly very much in the ascent.”

Joan and Marty will be taking over the 6am – 10am slot from Wednesday.

Today’s announcement comes just after Nova’s third birthday and the end of a hugely successful three-year period that has seen the station go from strength to strength. The most recently released JNLR figures show that the station is the only Dublin-based radio operation to have increased its listenership, with all other Dublin competitors either static or actively losing listeners. 70% of its daily audience falls into the key 20-44 age bracket. Overall it enjoys a 6.3% market share of 20-44s and 6.6% of 35-44s in Dublin**.
The station broadcasts to Dublin city, county and commuter belt. 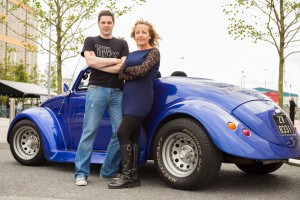